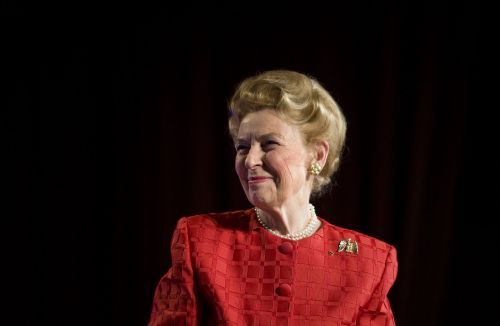 Following the death of Phyllis Schlafly in 2016, a dispute arose among two of her adult children regarding an alleged breach of fiduciary duty in the disposition of assets that were held in trust. Before her death, Phyllis created the Phyllis Schlafly Irrevocable Insurance Trust (the “Trust”). The Trust provided that the assets held therein “shall be divided into as many equal share[s] as shall be necessary to provide one of such equal shares for each of the grantor’s children who survives the grantor…” The Trust further provided that such shares shall be held by the trustee and that each child shall serve as the sole trustee of the trust created for his or her benefit.

Phyllis’ son, John, initially succeeded her as trustee, but he eventually resigned and her son, Andrew, stepped in to serve as successor trustee of the Trust. Trust shares were initially distributed to four of Andrew’s five siblings. However, Andrew retained the trusteeship of his own share as well as the share that was to be distributed to his sister, Anne Schlafly Cori. Andrew reasoned that the Trust was set up to be a generation-skipping, spendthrift trust for the benefit Phyllis’ grandchildren, and that he was concerned about Anne’s ability to safeguard the Trust assets for the grandchildren.

Ann filed suit alleging that Andrew was acting in breach of his fiduciary duty by failing to distribute her Trust share. Andrew defended himself by citing language in the Trust purporting to grant the trustee discretion to “hold in further trust or distribute” Anne’s share to her. He noted that the intention of the Trust was that it should serve as a generation-skipping, spendthrift trust, and that he owed a fiduciary duty to Phyllis’ grandchildren.

The Madison County Circuit Court ruled in Anne’s favor, granting partial summary judgment. In doing so, the Court cited long-standing Illinois case law standing for the proposition that trust documents must construed according to the same principles as wills, the goal being to determine the settlor’s true intentions. The best evidence of a person’s intent is the plain and ordinary meaning of the words used, taking into consideration the entire document. When the words of a trust are clear and unambiguous, they must be given effect, and a trustee’s failure to do so constitutes a breach of fiduciary duty.

Therefore, the language of this Trust – that the shares “shall” be distributed to each of the six children – had to be followed. The court did not need to hear extrinsic evidence concerning Phyllis’ true intent regarding Anne because the language of the Trust document itself was clear.